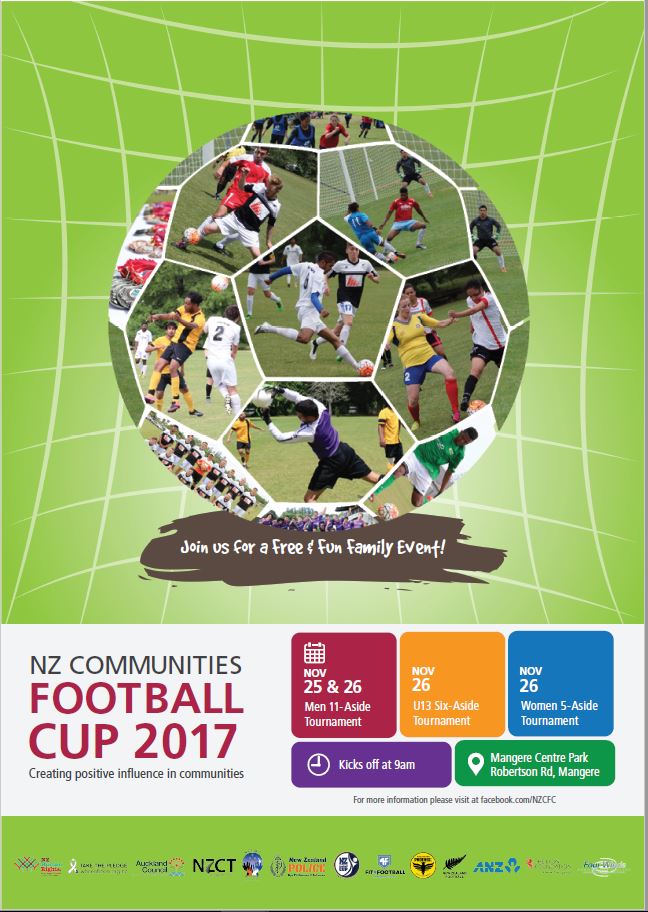 The New Zealand Communities Football Cup (NZCFC) is coming to Auckland this month, harnessing young people’s passion for football as different ethnic communities from across New Zealand come together to compete in the national finals.

The culmination of over 1,000 regional football matches, this year’s diverse line up includes teams representing Fiji, Argentina, Somalia, Colombia, Poland, Myanmar and the Solomon Islands. For the first time ever, under 13 teams will join the 16 men’s teams and 8 women’s teams vying for the national title on November 25 & 26 at Centre Park in Mangere.

Focused on celebrating cultural diversity in New Zealand, the Communities Football Cup is built on the concept that sport is a common interest in every country – and it can bring together teams from different cultures in the spirit of the game.

Assistant Commissioner, Deputy Chief Executive: Maori, Wally Haumaha, says the police are stoked to support an event that brings communities together to celebrate diversity and success: “This is the ninth year we’ve been involved with the Communities Football Cup, and over that time, this tournament has allowed our staff to engage with thousands of people from all walks of life. And, it means we can get out on the field too. May the best team win!”

New Zealand Football Chief Executive Andy Martin says, “The New Zealand Communities Football Cup is all about people from a wide variety of cultural and ethnic backgrounds taking to the pitch to share their love of football. I’m thrilled that the tournament is expanding with a youth competition this year – every element of this event is a reminder of the positive impact which comes from a collaboration around a good, common cause.”

Race Relations Commissioner Dame Susan Devoy believes the benefits of this event extend well beyond the playing field, and events such as the NZCFC are instrumental in connecting diverse communities and assisting with their integration in New Zealand. Auckland Mayor Phil Goff is rapt to be hosting the Communities Football Cup this year, an event which reflects the diverse people, culture and activities which make up Auckland.

ANZ GM of Retail and Business Banking for Auckland Andrew Webster says ANZ is proud to be the first private sector sponsor of the NZCFC, as amazing things can happen when people from different cultures, ethnicities and religions come together in pursuit of a common goal.

The Communities Football Cup is a day out for the whole family. Kick off is at 9am on Saturday 25 November and Sunday 26 November at Centre Park, Robertson Road, Mangere.