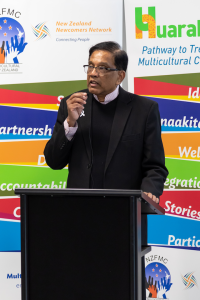 MNZ President Pancha Narayanan says, “We fully support the recommendations made by Productivity Commission especially where the Government has been asked to work with Māori on how to reflect Te Tiriti o Waitangi in immigration.

“Before the 2020 New Zealand Elections, MNZ prepared an 8-point proviso outlining expectations from the incoming Government. MNZ since its inception in 1989, has always maintained proactive stance on immigration policies and included immigration as point number five in this proviso. All the political parties were requested to show their immigration policy directives clearly within their election manifestos and to maintain those directives within coalition negotiations—for transparency and democracy.”

MNZ embraced E Tū Whānau, a movement for positive change, from early on and mentioned these values in its submission to the Productivity Commission. The six values of E Tū Whānau are: aroha (giving with no expectation of return), whanaungatanga (it’s about being connected), whakapapa (knowing who you are and where you belong), mana/manaaki (building the mana of others, through nurturing, growing and challenging), kōrero awhi (positive communication and actions) and tikanga (doing things the right way, according to our values).

Huarahi Hou is MNZ pathway to Te Tiriti-based Multicultural Aotearoa New Zealand. It is a community led initiative founded on the strong belief that cultural contact between migrants and the receiving community will smoothen the path to successful settlement and to developing a sense of belonging in Aotearoa New Zealand.